Below is a journal entry written by one of our Micronutrient Miracle inner circle test group participants, Michael. He journaled his experiences throughout the first 28 days, and now we're so thrilled to be able to share it with you!

“Coming alive is amazing” wrote Mira Calton in response to my April 22 Facebook post in which I announced that all morning joint pain was gone and that my brain fog had lifted. Indeed, it actually felt as if I was coming alive after less than two weeks as a member of Calton Nutrition's Micronutrient Miracle “inner-circle” (this after years of a seemingly lifeless existence). Only a scant seven weeks earlier, on March 3, an email arrived from Calton Nutrition announcing the inner-circle and outlining how one could take part in the selection process. Pictures and essays were due by March 20, a daunting challenge for someone with adult ADHD so, in typical fashion, I procrastinated. With time running out, I committed to apply and quickly wrote my essay and submitted it along with my pictures. I was not alone. A thousand others jumped at the same opportunity. I soon found out that I had been selected for an interview and shortly after that I was one of the lucky twelve (and ultimately thirteen) selected to participate.

We all came together for the first time on April 11 by way of an internet chat. Although we were scattered all over the United States and Canada, I pictured us together as the 7 Mercury astronauts in the classic 1983 movie “The Right Stuff”, walking forward in slow motion into the unknown. However, in a way, we were all made of the wrong stuff! Wrong stuff in that among us were sufferers of ADHD, fibromyalgia, diabetes, obesity, Hashimoto's thyroiditis, hormonal imbalance, sleep disorders, osteoporosis, and low energy. Fact is, my wife believed that I would be chosen before I even submitted my materials because of my long laundry list of health complaints. But, in another way, we were indeed made of the right stuff, the determination to see this challenge through for the entire 28 days.

Initially I was hoping that the micronutrient miracle for me would mean losing weight (I was at a lifetime high of 256 pounds), being able to sleep more than four or five hours per night and a lessening of my ADHD symptoms. After reading a pre-print of the book, I chose to follow the ketogenic diet plan, believing that it would give me the fastest weight loss. When day one arrived, I made my first triple threat shake for breakfast. This consisted of the nutreince vanilla flavored AM multivitamin packet in 16 ounces of spring water along with 2 tablespoons of SKINNYFat, two scoops of IN.POWER protein powder and a small amount of chocolate Stevita. My first impression was that it was pretty good, but was that all I was supposed to have until lunch? In a word, yes! I have to admit that I did not keep a food diary, but I did stick steadfastly to the recipes listed under or the ketogenic plan. Whatever I had for that first lunch, I know that it was good because every recipe I tried in this plan was excellent. The highlight of that day, however, was not a meal, but a mid-afternoon Zoom meeting, an online meeting between the Caltons and all of the inner circle members. Each of us had the opportunity to submit any questions that we had about the program and one by one, both Jayson and Mira answered them for us. By the end of the hour, which turned into nearly two hours, the meeting took on the air of a pep rally. I don't know about the others, but I was psyched!

On the third day of the program, I woke up to the sound of my alarm. The micronutrient miracle that morning was not that I actually did get up without hitting the snooze. In fact I didn't even know how to hit the snooze because I'd never done it. The micronutrient miracle was that I hadn't turned it off two hours earlier at 3 a.m., because that's generally when I had been waking up. Almost since the beginning of the school year (I'm a high school chemistry teacher) I had been sleeping only four or five hours a night. So by mid-April, I had built up quite a sleep deficit. The brain fog created by this sleep deprivation, added to my ADHD, made everything much more difficult, especially teaching chemistry to high school students all day. In fact, I had taken to sitting to teach my classes and I was not as aware of student behavior as I needed to be. I don't like to admit it, but I had become a non-effective teacher. I never fell asleep in class, but many times, I had great difficulty staying awake while driving home at the end of the school day. So, sleeping through the night was a miracle, and one that has repeated every night since.

On the fourth day of the program, I got up to shower and stepped onto the scale. OMG! I had lost over four pounds. I (carefully) took a picture of the scale reading and posted it for everyone in the Facebook “inner-circle” group to see. Although the weight loss eventually slowed to about a pound per week (slow but steady wins the race!) this initial drop really boosted my enthusiasm for the program. Enthusiasm was not limited to me. 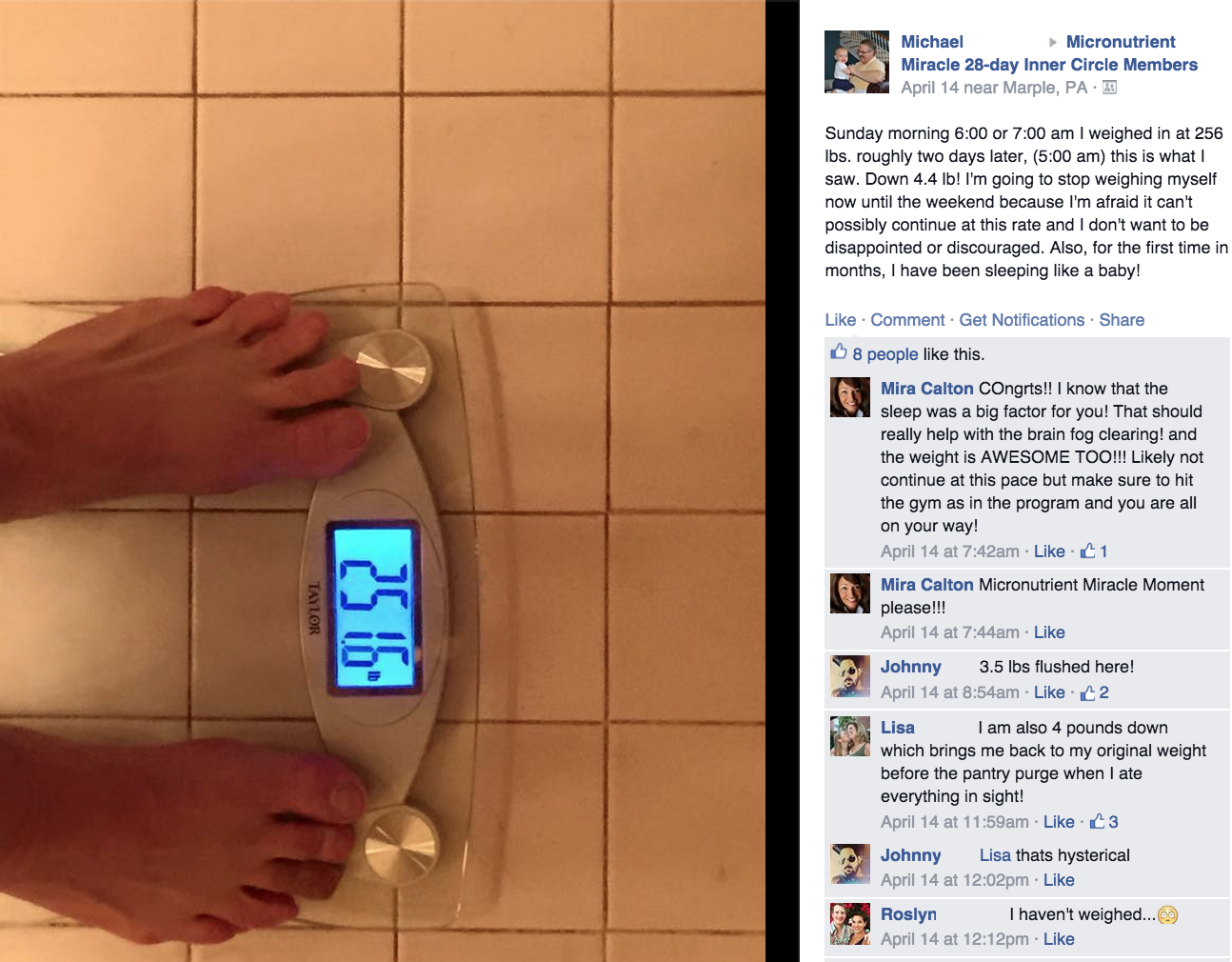 Our “inner circle” Facebook page was growing by leaps and bounds as amazing posts came rolling in. Others had seen the same weight loss, many expressed improved sleep and a host of other improvements. The Facebook community was a great place for motivation, but it was a great place to turn in times of trouble also. On night five I woke up with a painful leg cramp – I had to get up and put full weight on my foot to loosen my calf. Fortunately, I went straight back to sleep. When I informed the group what had happened, many people responded to tell me I needed potassium – use sea salt! I never had leg cramps after that. I paid it forward and tried to help others whenever I could. This social media aspect of the program was invaluable and I made many friends through it. We told each other about our progress, we supported one another, we offered new recipes and posted pictures of our micronutrient miracle dishes. If my weight went up, everyone was there to lend support to keep up my morale. It's impossible to overstate just how important the social aspect of this program is.

As days moved by, I was sleeping better and better. As a result, by day eleven, I realized that my brain was functioning clearly and that even my ADHD symptoms had lessened. I truly was coming alive! In just eleven days I had met two of my goals and I was still losing weight. What else could possibly happen? Plenty! My energy skyrocketed! Now I was walking around my classroom all day, keeping a much more focused eye on what was going on. At the end of the school day, I was able to drive home without getting drowsy. Once I got home, I had plenty of energy to work around the house, and to cook dinner. My wife and I cooked the micronutrient miracle recipes together and I was finally able to get her to join in the program with me. She has since enjoyed her own micronutrient miracles.

Another change, one I was not anticipating, was the change to my skin. One day, another teacher came into my room and right in front of my class enthusiastically announced that my skin was glowing! I was a little embarrassed, and the students had a good laugh! Later I checked a mirror to see if I could see a difference, but I noticed another unanticipated change. For several years I have had “geographic tongue” -small patches of taste buds fall out leaving a map-like appearance. This had disappeared; I had a normal tongue again!

My weight continued to drop, thirteen pounds in all by the end of 28 days. Miraculously, thi
s happened despite the high fat content of my meals. I was even putting butter on steak, yet off came the pounds. But to me, the most miraculous and unexpected change was this: a strange pain that I had for several years completely went away! As a man, it's a little embarrassing to talk about but I had a troubling pain in my left nipple. I had even had a mammogram at one point, negative, thank goodness! (One percent of all breast cancer cases are in men). Two weeks into the 28-day program I noticed that the pain was less. By day twenty-eight, the pain was gone and has remained gone since.

My hope for you is that your own experience with the Micronutrient Miracle program will be as valuable for you as it was for me and the other members of the “inner-circle”. I know it will be!

You can get your own copy of The Micronutrient Miracle, available now on Amazon and other retailers. For a limited time, we are offering $200 in free gift certificates as a bonus gift. These gifts include places such as Thrive Market, US Wellness Meats, Vital Choice Seafood and more. Click here to watch our video and learn how you can grab your book and gift certificates!